There are laws and regulations in place that require worksites to take measures to prevent dirt, mud, and other debris from reaching public roadways. Our mats at Trackout Control Mats are just as effective as other stabilized construction entrance and exit solutions but are available at a fraction of the cost. Contact us today to order your trackout control mats in predetermined sizes or custom cuts!

At RubberForm Recycled Products, our patent-pending trackout control mats fit the needs of almost any job. Below are the mat sizes that we keep in stock. However, should you need a custom-sized mat created, simply reach out to our team! We’re happy to accommodate however we can.

Site developers, excavators, construction companies and more, are under pressure to minimize the amount trackout and carryout debris (including dirt, rocks, dust, mud, and other elements) from construction sites onto public roadways. Municipalities are enforcing regulations to protect against damage to property and the environment. Failure to properly manage a construction exit may lead to fines and lawsuits.

Our Trackout Mats are the most economical, easy deployment and environmentally sound stabilized construction entrance/exit solution to control carry-out and track-out debris from job sites.

Vehicle vibration caused by driving over the trackout mat removes sediment that might otherwise be tracked onto road surfaces. Then our durable, yet portable and reusable trackout control mats trap the debris as the vehicle passes over.

Installation is fast and simple: no extra parts needed, no digging, no laying down gravel, or no filtering required. Just lift off the pallet and lay it down.

At the conclusion of the project simply fold up the mats for transport to your next job site!

We can custom design to fit your job site needs, contact us at Trackout Control Mats today to order yours!

Construction companies, site developers, and other worksites are constantly under pressure to minimize the trackout and carryout debris that makes its way onto roadways. Municipalities and other lawmakers have strict regulations surrounding trackout, so it’s important that all worksites take necessary measures to prevent bringing debris onto public roadways. Luckily, our stabilized construction entrance and exit solution — trackout control mats — are an affordable and effective trackout control solution. 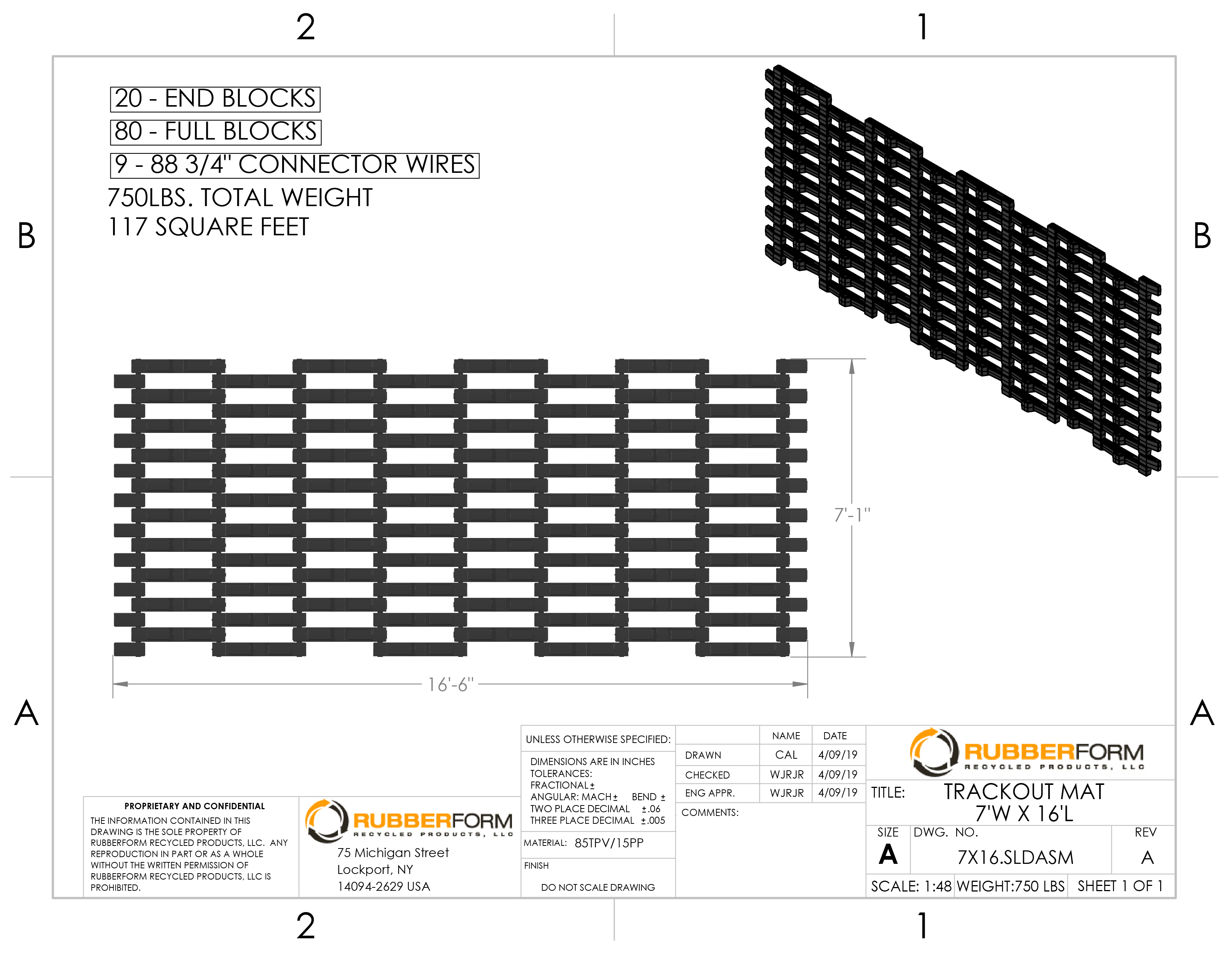 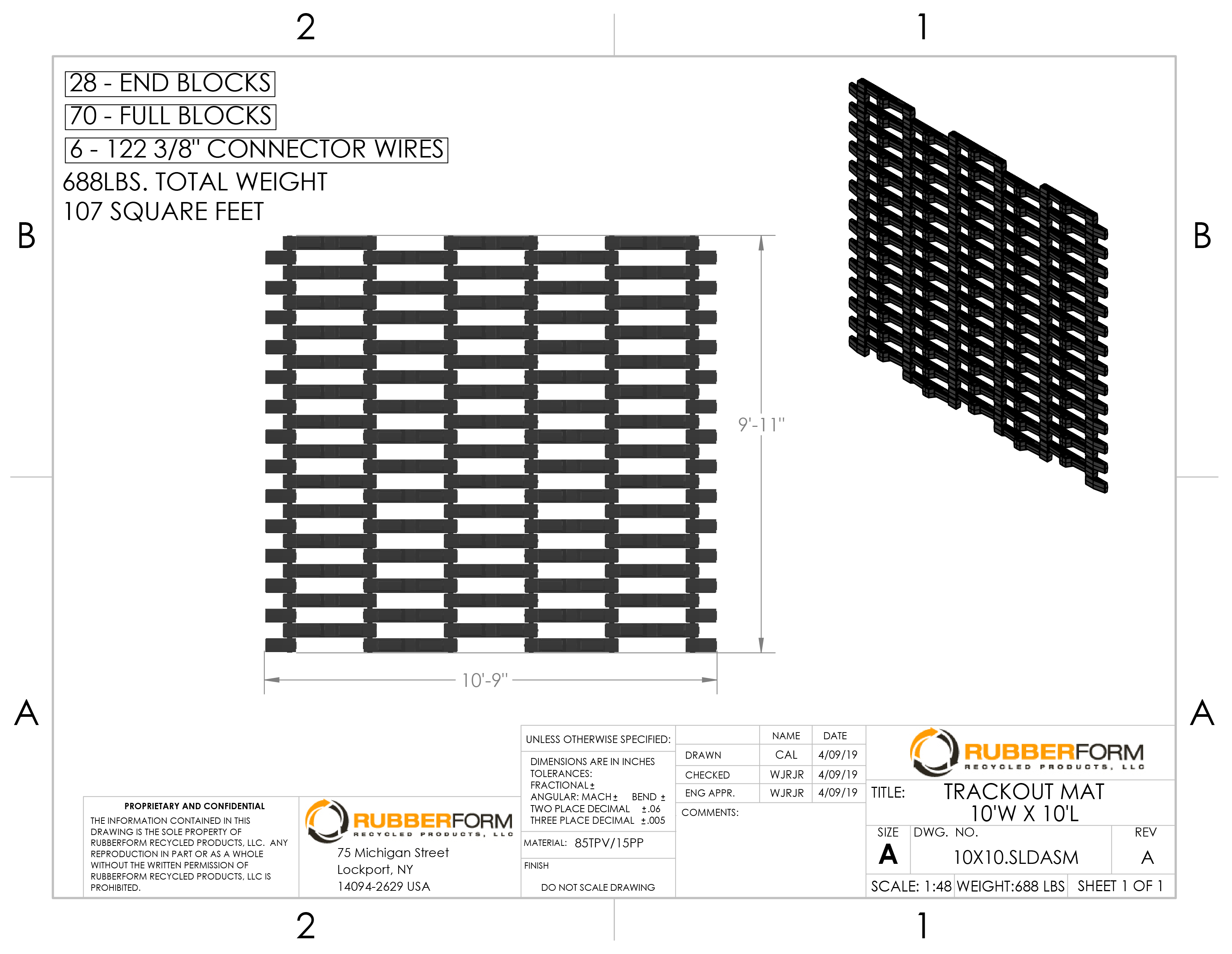 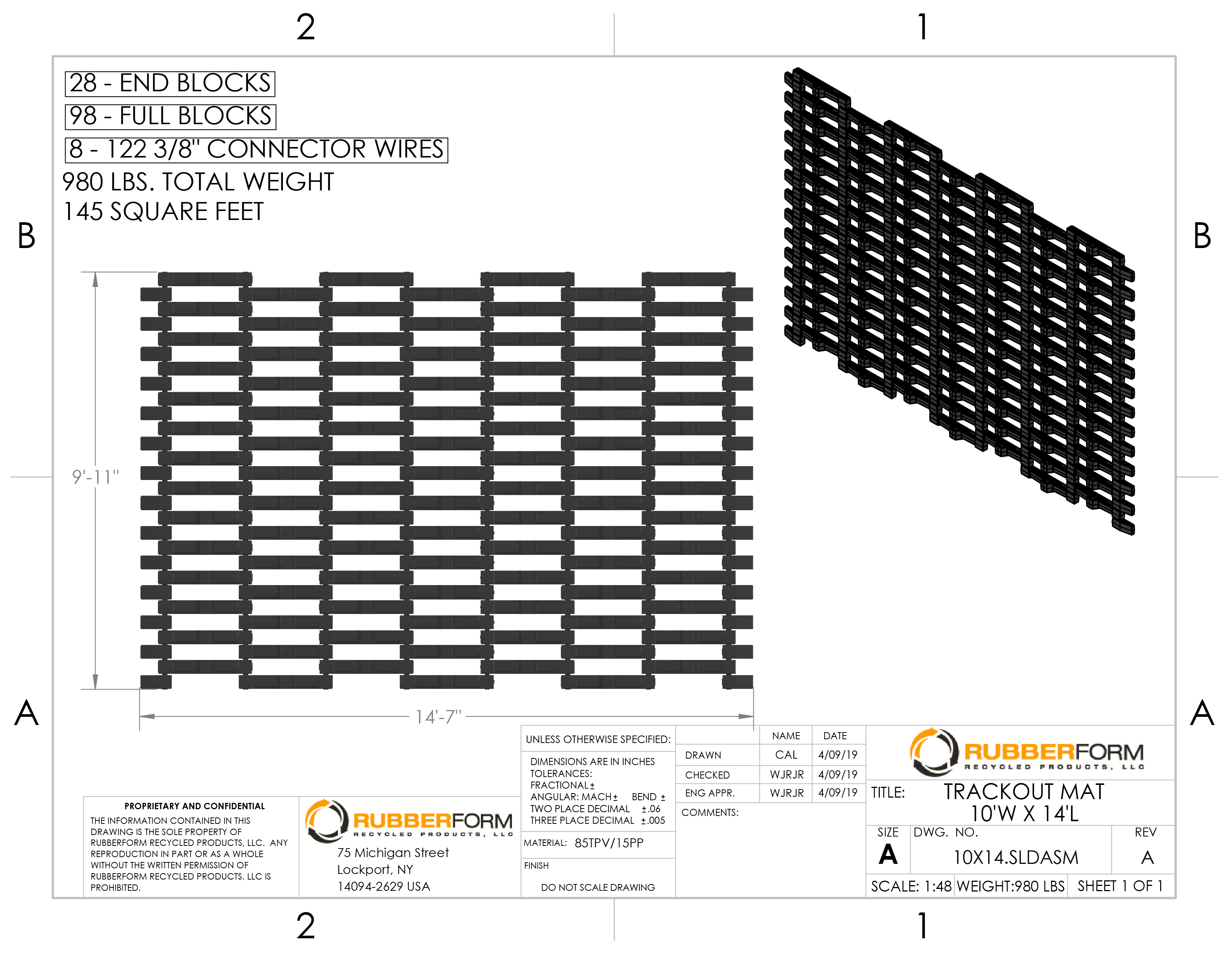 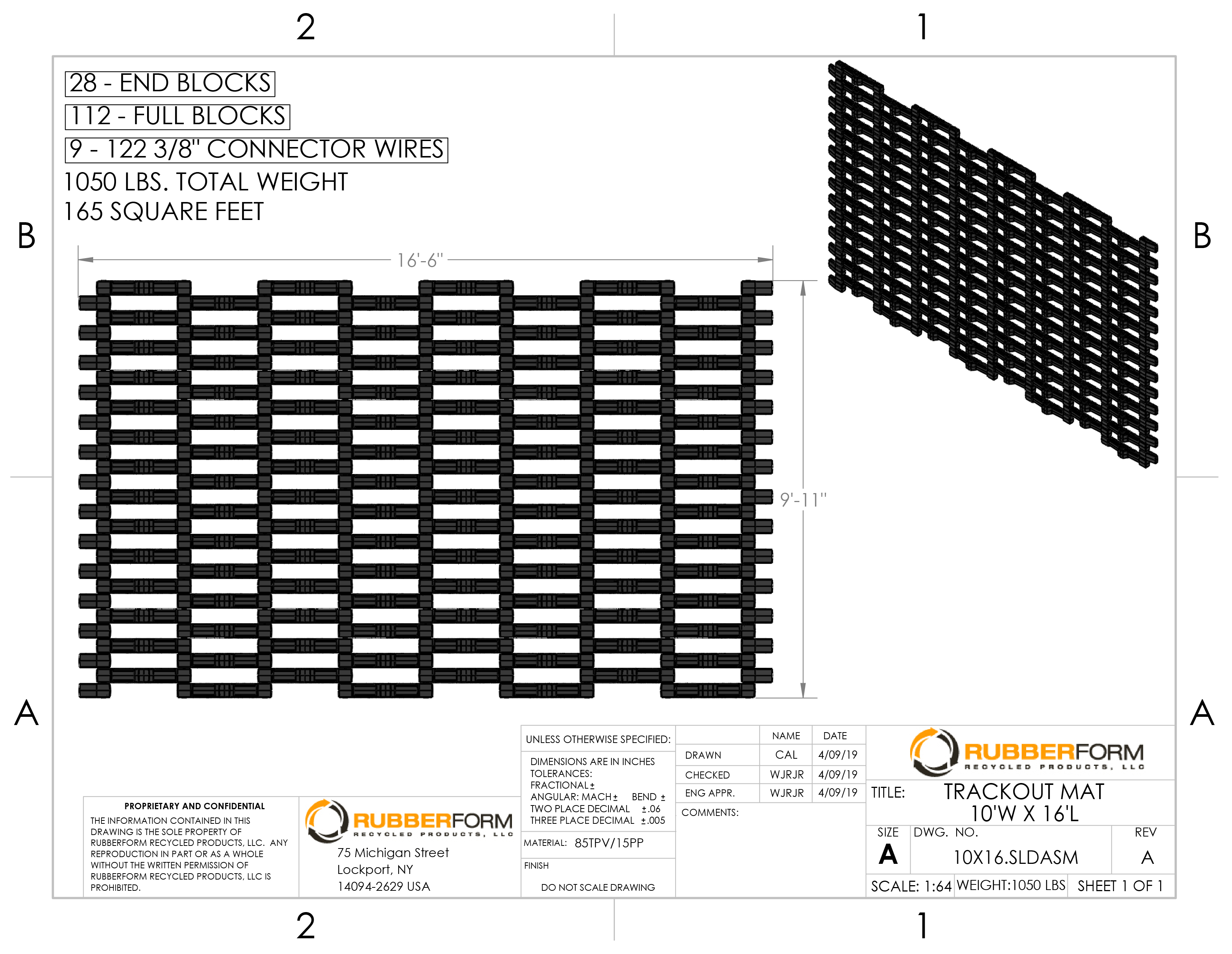 Trackout is often composed of dirt, mud, stones, gravel, or any other material that can make its way from the construction site to the public roadways. Trackout gets its name from how it gets to the roads — by being tracked out on the tires of heavy machinery or work trucks leaving the worksite. You may also hear the concept of trackout control be referred to as sediment control, a dust control system, particulate matter removal, or as a stabilized construction entrance. All of these names are essentially talking about the same thing — controlling the amount of construction-site debris that ends up on public roads.

Why is Trackout a Problem?

The laws surrounding trackout control have been put in place for good reason. Dirt, rocks, and other debris on the roadways can wreak havoc on unsuspecting vehicles driving through the area. Rocks can chip windshields or scratch paint, dust can kick up and lower visibility, and more.

More importantly, though, having poor trackout control for your construction site has a very strong, negative environmental impact. Particulate matter (PM) is a type of air pollutant that is monitored and regulated. And, one of the largest contributors to particulate matter comes from dirt and debris on roadways that came from construction sites. The dirt and debris that are deposited onto public streets are picked up and thrown back into the air by the tires of cars passing by. This process is called re-entrainment and can be a major air pollutant due to the amount of particulate matter that it adds to the atmosphere.

Trackout doesn’t only affect the air quality, though. It also contributes to polluting local water sources. Debris and other construction material from the roadways drain into the public water systems. Sometimes, this debris from construction sites contains harmful chemicals that can create pollution in the local water supply.

Being environmentally responsible and investing in sediment control for your construction site doesn’t have to break the bank, though. Our track mats at Trackout Control Mats are a very effective and very affordable solution. Order yours today and reach out to us for custom sized track mats!

In the past, trackout control was a time-consuming and very expensive endeavor. You could choose to install a gravel pit, a wash pit, or create a paved construction access point. All three solutions take a long time to put into place and cost a fortune to maintain as time goes on. Worse yet is that they are one-and-done methods. This means that once the job is done, that trackout method can never be used again and you’re simply out all that money you invested.

Our tracking pads at Trackout Control Mats provide you with unmatched value by saving you time and money. They require little to no maintenance due to their simple and durable design. Little to no necessary maintenance means little to no maintenance costs. Our tracking pads at Trackout Control Mats also have a very low upfront cost, allowing you to invest more in your business rather than expensive trackout control solutions. Perhaps the biggest value, though, comes from the fact that when your project is finished, you can simply roll up your trackout control mats and bring them to the next work site.

And, as an added bonus, all of our tracking pads at Trackout Control Mats are sustainably made and shipped. Our products are made from 100% recycled rubber products and we go to great lengths to make our company as environmentally friendly as possible.

How Do Trackout Control Mats Work?

The tracking pads work for any size vehicle and are completely safe to drive over. Trackout control mats are made from extremely durable recycled rubber and trap the debris knocked loose as the vehicle passes over.

Installation is fast and easy. No digging is required nor do you have to lay down gravel or do any filtering. Trackout control mats are great on their own for creating a stabilized construction entrance at each entry point or can be paired with other trackout solutions for the ultimate trackout control.

Feel free to contact us to learn more and, when you’re ready, order your tracking mats from our team at Trackout Control Mats.

Our sediment control system at Trackout Control Mats is second to none when it comes to effective trackout control at a fair price.

Not only do you get to prevent trackout for less, which in turn reduces your impact on the environment, but you are also reducing your environmental impact by using 100% recycled rubber! So don’t wait, order your tracking pads from our team at Trackout Control Mats today!